Lord of the Lava Caves is a boss fought in Baten Kaitos Origins. Some fans speculate that this is the Guardian of Alfard's End Magnus, in keeping with the naming convention of the Sadal Suud and Diadem's Guardians and the fact that the Guardian is never seen in Eternal Wings.

An ancient beast of legend born from magma. Possessing a construction able to swim freely through molten rock and light itself ablaze. Feeds primarily by chasing down prey and roasting them before devouring them.
Uses: Fire, Flames
Weak: Ice

This boss's high HP gives it an extra edge. Molten Lunge can deal 450 damage and is often chained to the end of a combo to deal in excess of 800 damage making it difficult to survive even at full HP. As such, focus on taking as much HP as you can off the Lord. If you get an opportunity, use MP Burst, but don't make a specific attempt for it. You'll want to chain and relay a lot of Ice based magnus, because for the opportunity to deal 1500 damage combos with the additional bonus of causing Freeze. 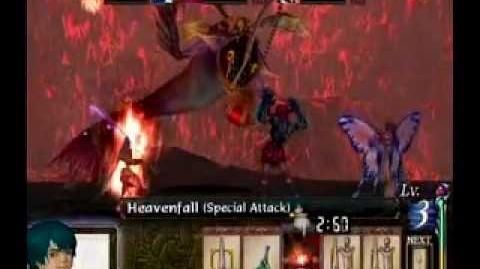 Baten Kaitos Origins Speedrun - Segment 21
Video of the battle
Add a photo to this gallery
Retrieved from "https://batenkaitos.fandom.com/wiki/Lord_of_the_Lava_Caves?oldid=18291"
Community content is available under CC-BY-SA unless otherwise noted.