Milly is a major character and party member in Baten Kaitos Origins.

Milliarde is the daughter of Imperial Spiriter Baelheit. When Baelheit conducted, and subsequently failed, to fuse a piece of Malpercio to an unknown subject, an Afterling was created, and before it could be contained, it attacked Milly, leaving her with large portions of her body gone. Her father placed her on life support, and later returned to make her a new, more powerful body with his newly built Machina.

As a young woman, she attended the School of Magic in Anuenue (althought she slept through Extinct Magical Creatures class; she thought it not a very practical class). As a high ranking Imperial officer's child, she was chaperoned to and from school each day. She and her father were not close, however, as his work often kept him away. Unknown to her dad, her chaperone would often indulge her by taking her to the Quietlands of Nekkar, where she would gather many human-shaped stones.

As a young woman she simply likes to be called Milly. She possesses a strong will and unsurprising power considering her 1/2 Machina status.

She meets our heroes after she is sent by her father to spy on Sagi to discover the nature of his power. Right before Sagi can be captured by a young Giacomo, she rescues both he and Guillo during their escape from the Empire.

Though she claims that it was "because she simply can't stand seeing people get hurt" Guillo is not convinced and this leads to them arguing a lot. Soon enough she reveals her initial ploy, but sides with Sagi and even helps defeat her own father. She falls in love with Sagi and develops a great bond with Guillo. Just before fighting her father to stop him, she was ultimately forced to reveal that most of her body was replaced with Machina to Sagi. After her father was defeated, she then witnessed Verus murder Baelheit in cold blood, reacting with shock and horror alongside her comrades (in particular, she was horrified at what Verus had done to Baelheit). Although saddened by Baelheit's death, she held back her sadness enough to ensure they stop Verus, their true enemy. At the end of the adventure, she marries Sagi. The two move to Mira for their honeymoon.

It is known that she and Sagi settled and lived with Duke Calbren of Mira. Anything beyond that is pure speculation, as there's been no official word on what became of Sagi and Milly, or where they were during the events of Eternal Wings. A popular fan theory is the couple had a daughter by the name of Melodia before dying of a plague (possibly from Taintcloud poisoning from Duhr or the War of the Gods), leaving their daughter an orphan, with only the Duke to take care of her as her grandfather. Another theory is they frequently visited Kalas while he was an infant, although their fate afterward is uncertain. The creators have not confirmed nor denied either theory.

Rescues Sagi, then proceeds to tag along. Age 17. Born and raised in the Empire, she longs to see the world. She flaunts her studies at the School of Magic, but slept through the key lectures. She hefts twin weapons with astonishing ease.
Uses:Variable
Weak: Variable

Milly fights with twin maces and kicks. She has a high resistance to physical attacks, and has access to some of the strongest defensive magnus in the game, allowing her to shrug off non-elemental blows with ease. She's not nearly as strong as Sagi or Guillo, but hits multiple times, overwhelming her foes with sheer volume of attacks. Milly doesn't get a Level IV finishing move, unlike Sagi and Guillo. Instead, she has several attack cards unique to her that either stack with or replace regular attack cards, giving her the widest variety of attacks. She has the least amount of special attacks and EX combos, and her kicks are always non-elemental. On the other hand, her EX combos are the easiest to pull off, and many of them boost her turnover rate so she can attack even faster. 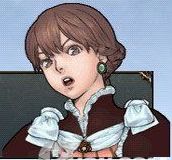 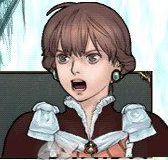 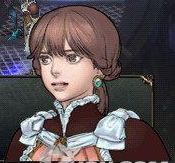 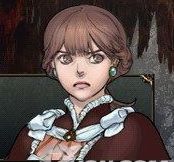 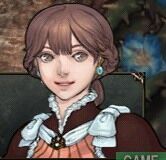 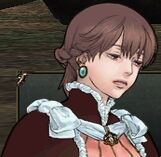 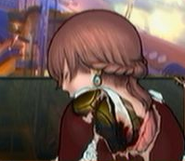 Milly in the ending of the game
Community content is available under CC-BY-SA unless otherwise noted.