Nekton, Shrine of Spirits, is a place located in Mira, where the barrier between dimensions is the thinnest, thus allowing people to become bonded with Guardian Spirits, thus becoming Spiriters. It is where both Kalas and Baelheit receive their Guardian Spirit.

Its appeareance is that of a dark grove or forest, with its trees exhibiting a behavior akin to bioluminiscence.

Although it is not visited in the game, it is shown how Baelheit visited Nekton (after the accident that killed his wife and hurt his daughter Milly) and received his Guardian Spirit, Daimon.

Nekton is, arguably one of the most important places in the storyline, being visited in the main quest, flashbacks and even the ending sequence. After Giacomo kills Georg; Fee and Kalas flee to Nekton. There, Fee gives his life for saving the life of his brother. Right after that, Kalas meets with Melodia, who offers him to receive a Guardian Spirit, in exchange of his help. The heroes travel to Nekton after hearing in Reverence that some stranger were seen entering the shrine. Finally, they catch up with the Chaotic Trio and their hostage Melodia. When the heroes and the kidnappers are about to fight, a creature from another dimension appears, so the heroes fight with it, while Giacomo's group run away. After defeating the creature and rescuing Melodia, Kalas discovers that their only End Magnus is missing (in fact, he secretly gave it to Melodia in Parnasse). 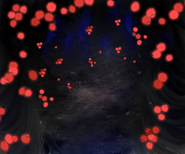 Add a photo to this gallery
Retrieved from "https://batenkaitos.fandom.com/wiki/Nekton?oldid=27701"
Community content is available under CC-BY-SA unless otherwise noted.