"Spiriters are doomed to influence the fate of the entire world"

A Fortunate being in the Baten Kaitos series who has the power to hear, talk to and play host to a by forming a soul link to a spirit from another world called a Guardian Spirit. Some say the spirits speak great words of destiny to their hosts.

All of the above individuals at one point or another formed a link with a spirit and used their powers. For Baelheit he created Machina and bonded with his spirit prior to Baten Kaitos Origins. Kalas bonds at the beginning of Baten Kaitos Eternal Wings and the Lost Ocean and Xelha bonds with the same spirit after Kalas betrays the team. 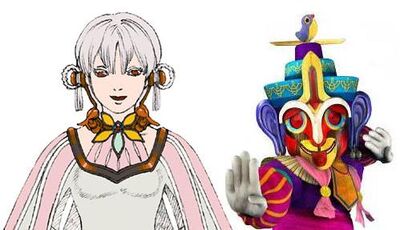 Potential Spiriters hear the voices of guardian spirits but have not bonded with any spirits throughout the series.

Melodia: she guides Kalas to a spirit and helps him to form the bond. Later, as she is trapped in Malpercio, she hears the calls of the spirit when Kalas comes to rescue her. To note: Melodia is possibly (or can be considered as) a Malideiter.

Mizuti: from the moment Mizuti is met, she instantly hears the spirit's voice and occasionally speaks with it.

Verus: he pretended to be a Spiriter but in truth simply was using the legend of the Spiriters to secure power in the empire.

Sagi: he actually is a Malideiter.

Retrieved from "https://batenkaitos.fandom.com/wiki/Spiriter?oldid=27483"
Community content is available under CC-BY-SA unless otherwise noted.