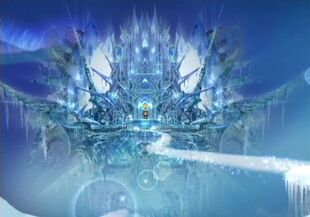 Wazn (also known as the Ice Lands) is an island nation explored in Baten Kaitos: Eternal Wings and the Lost Ocean. Known as a mythical land of ice and cold to the people of the Sky, Wazn lies faraway and secluded from the Five Great Nations, as it has for several hundred years. The island exists in the lore of the outside world as a nation of magic and witches, whose Queen is said to be the most powerful practitioner of magic in the world.

Ancient Magician: "I hereby lay my life down to seal the Ocean, to remove its song from the Earth... To halt the neverending lullaby that has blessed this world forever past..."
Ice Queen: "Cast light upon the darkened earth. Save those lost in despair. O Mighty Ocean, guide us as we journey through... The darkest pit of night..."
Ancient Magician: "May time, ever fleeting, forgive us... We who have forsaken our song, and buried our future..."
—The sealing of the Ocean, including the Ocean's Prayer

Wazn was home to the powerful Witches of Wazn during the Age and War of the Gods. After the War, the Witches worked with the Ancient Wizards of Duhr, whom arbitrated and ultimately ended the War, to salvage the poisoned Earth and Ocean. The Wizards sealed the body parts of the defeated Malpercio into the End Magnus and used their power to raise the Five Great Nations into the Sky, while the the Witches used their magic to absorb the Ocean into the Ice Queen, establishing her lineage as its guardians. Having preserved the Ocean, the Witches used their Magic to elevate Wazn into the sky, joining the other nations.

Hundreds of years after the ascent, it was decided that Wazn would isolate itself from the other nations, with a Magic barrier being erected around its outer ice cliffs. It isn't know what exactly prompted this withdrawal from the world stage, but it's thought to be in response to threats to the Ocean's well-being.

About 1000 years after the ascent, the Ice Queen at that time, Xelha, took part in the second defeat of Malpercio and afterwards descended with her fellow heroes to empty the Ocean back onto the purified Earth. Shortly after the four shown nations returned to Earth and the Ocean was released, Wazn came to rest in the middle of the new Ocean. Wazn did not depend on the End Magnus to stay afloat, but rather the Witches' powerful Magic. With the nation's mission, to preserve the Ocean, completed, Wazn could take its place again on Earth.

Wazn is located in the north-eastern sky (presumably some distance out to avoid interaction with other nations), in the general area of the Celestial Alps and Hassaleh on the map. The closest of the Five Great Nations are Alfard and Sadal Suud.

The island of Wazn consists of a large basin surrounded by an extensive, snowy mountain range, or "ice cliffs" (Gomeisa). In the middle of the basin lies a floating mass of ice comprised of a town (Cursa) and towering castle (Kaffaljidhma). The island's central basin appears to be filled with water (possibly frozen) as residents of Cursa can be observed ice fishing and a dazzling reflection can be seen underneath the town and castle from afar. Bridges made of snow or ice connect the ice cliffs to the town and castle (though seem to only appear on command through the use of Magic). A harsh blizzard continuously rages across Wazn's ice cliffs, leaving a permanent deep snow throughout. An aurora can be seen at all times in the sky above Wazn.

Wazn's inhabitants are distinct for their adaptation to the cold environment and their proficiency with Magic, especially amongst its Witches. In light of Wazn's freezing climate and apparent lack of natural materials, all structures, from buildings to streets, are made of ice. Even beyond major constructions, almost all everyday materials appear to be made of ice as well. This includes items one would expect to melt, such as pots for cooking, lamps, and candles (all likely incorporating Magic to be possible). Because of the nature of Wazn's architecture, ice sculpting is a highly valued skill.

The people of Wazn are mostly isolated from the other islands (which the population refers to as the "Land nations") but still appear to be informed about major events that occur in the outside world. Most residents have a great admiration for their leader, the Ice Queen, and take great pride in the White Dragon.

Wazn's population engages in a variety of activities that make use of their icy environment. Ice sculpting and ice fishing are popular amongst adults, and many are passionate about them. It's also suggested that people in cold regions are notorious and unique for their ability to consume large amounts of alcohol. Kids meanwhile enjoy creating snowmen (which has evolved to be a complex art form), snow ball fights, skating and sledding. Skating is a much more popular activity than sledding as sledding is widely seen as being wimpier and amateurish.

Wazn is presided over from Kaffaljidhma by a line of matrilineal Ice Queens, the latest of which is Xelha. The Ice Queens are highly admired by the people of Wazn and are said to always act in a responsible and and custodial manner.

Wazn has a small and highly devoted defensive army known as the Knights of Wazn. It's assumed that many of Wazn's Witches also protect the nation, beyond maintaining the barrier. The national symbol of Wazn is the White Dragon and it's national prayer is the Ocean's Prayer.

Retrieved from "https://batenkaitos.fandom.com/wiki/Wazn?oldid=25610"
Community content is available under CC-BY-SA unless otherwise noted.